Chris Buzzelli was a member of the music faculty at Bowling Green State University from 1984 to 2015, where he was Professor of Guitar and Jazz Studies, director of the Vocal Jazz Ensemble, and founding director of the New York Voices Vocal Jazz Camp. He has also served as adjunct faculty at the University of Michigan and the Oberlin Conservatory of Music, and has presented clinics and masterclasses at regional and national conferences and other colleges and universities around the nation. He has written articles for Jazz Educators Journal, Just Jazz Guitar, and American String Teacher, and has published a number of solo guitar arrangements and guitar ensemble compositions. He has contributed to numerous publications for Mel Bay Publications including their “Jazz Standards” series, “Guitar Ensemble” series and “Master Anthology of Jazz Guitar Solos” series, and is author of “The Complete Book of Seven-string Guitar”. Many of his arrangements for vocal jazz ensemble are published by Sound Music Publications. He appears on several recordings, with two released under his own name. Buzzelli maintains an active performing schedule, mostly in the Northwest Ohio area, but has also played in some nationally recognized venues including the Classic American Guitar Show in Long Island, New York, the Chet Atkins Appreciation Society event held each summer in Nashville, and the first World Guitar Congress held in Towson, Maryland. 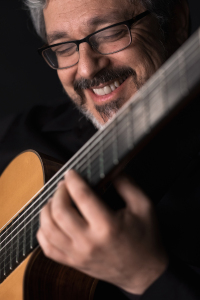